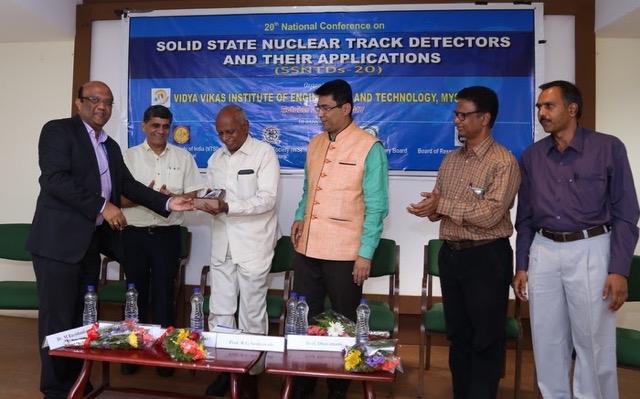 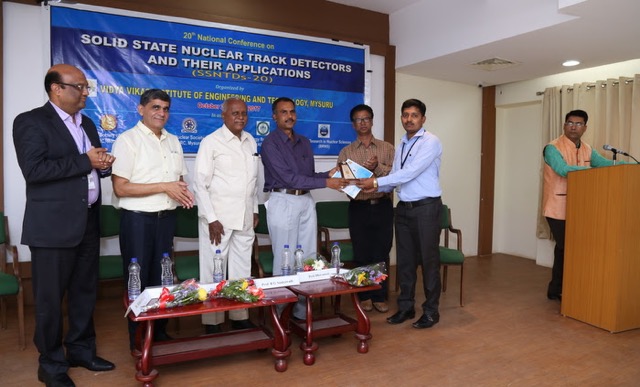 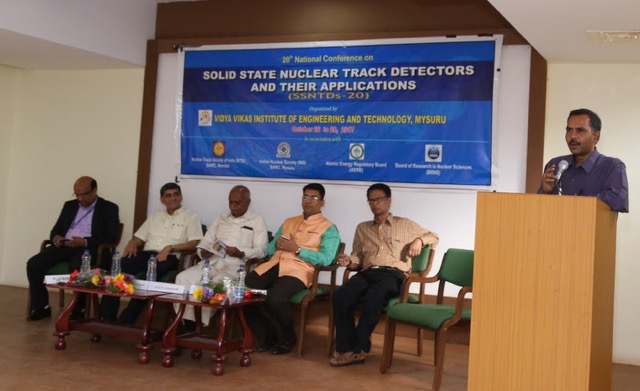 The Department of Physics, VVIET, Mysuru, has organized a 20th National Conference on Solid State Nuclear Track Detectors and Their Applications, which has happened second time in South India in association with Nuclear Track Society of India(NTSI), Indian Nuclear Society(INS), Board of Radiation and Nuclear Science (BRNS) and Atomic Energy Regulatory Board (AERB) during 26 - 28 October, 2017 at VVIET Campus, Mysore.

Prof. P Venkataramaigh, Former Vice Chancellor, Kuvempu University, Shivamogga was the Chief Guest. He appreciated the works of researches in the field of Solid State Nuclear Track Detectors. Conference like these provides a good exposure to the young researcher and students to carryout research work and create interest in research. SSNTDs have number of applications in many fields. In his speech Prof. PV appreciated that being a technological Institute, VVIET has proved its concern over Basic Science by organizing such a biennial mega event.

Prof. R.P. Chauhan, Professor, National Institute of Technology, Kurukshetra, president of International Nuclear track Society(INTS) and stand-in President of NTSI and spoke about importance of such conferences in each and every field at all types of college and universities.

Among 120 research paper discussed in the conference 6 papers ( 3-Oral, 3- Poster)were considered as best and chief guest distributed the prize with certificates.

Resource persons, Session Chairs, Special Invites, participants from various parts of the country, HODs and Faculties of VVIET were present in the valedictory programme.